We took a break from our worldview series this week to talk about the Burnaby Church and how things are going. In our class we discussed some of the topics that the church as a whole have been talking about, because I wanted to remind the youth that they are part of the congregation too, so these things impact them, and though they may be younger they are still vital parts of the Church.

Often when this kind of topic (meaning youth and the church) comes up someone will throw 1 Timothy 4:12 out there.

Don’t let anyone look down on you because you are young, but set an example for the believers in speech, in conduct, in love, in faith and in purity.

This is a beautiful verse, but I’ll admit that I wince a little when people tell it to teenagers like it’s about them. The reason for this is mainly because, first and foremost, it was for Timothy. It was a specific encouragement for Timothy in his particular position as a leader in Ephesus. Plus,  Timothy is probably in his thirties if not older.  His youth is in comparison to the culture around him which placed elders in the seat of authority and honour (something we sadly don’t always do too well in the western world).

So while Timothy may not be in the same situation as teens who get told this verse, there are a lot of really important things to note. The main thing is that an example for other believers isn’t defined by our age or status, but by our speech, conduct, love, faith and purity. I think that’s really important to know! Can we speak with compassion, can we act with love, can we have faith in God’s goodness and follow his good ways for our lives? That is what will set an example- that is what will lead.

When it comes to youth, or young people, the Bible is chock full of stories where young people rise up and surprise everyone. Where youths are used by God to do something amazing.

In Genesis Joseph is the second youngest of 12 sons, and yet he becomes second in command of Egypt, saving nations from famine,  and gets a double blessing from his father.

The story of Esther describes a young Jewish women (probably at least in her teens) becoming Queen of a foreign land, disrupting a murderous plot, and saving her people.

The “great king” of Israel, is David a boy who right in front of his older brothers, countrymen and King, declared his trust in YHWH and defeated Goliath.

Jesus himself says all sorts of wild things like;
I praise you, Father, Lord of heaven and earth, because you have hidden these things from the wise and learned, and revealed them to little children. or
Unless you change and become like little children, you will never ether the kingdom of heaven.

Now all these stories and occurrences have greater contexts and meanings in their own right, but I think they reveal something very amazing about how God interacts with us. God often uses unexpected ways, including the youngest amongst us, to guide and communicate to us.

Sayings that declare we’re better off to be like children than the wise and learned , are meant to catch us off guard. They are meant to perk our ears up to the fact that God is trying to connect with us is so many ways, yet we may be actually blinding ourselves to some of the things he’s saying.

This topic makes me think of a small, but profound, interaction I had with my friends’ daughter. I was at my friends’ (Shawn and Yvonne) house. They have four amazing little girls and at the time their second oldest was around 5 or 6.

Now to preface our conversation, I should make it known that I have a Michael Strahan-esque smile. 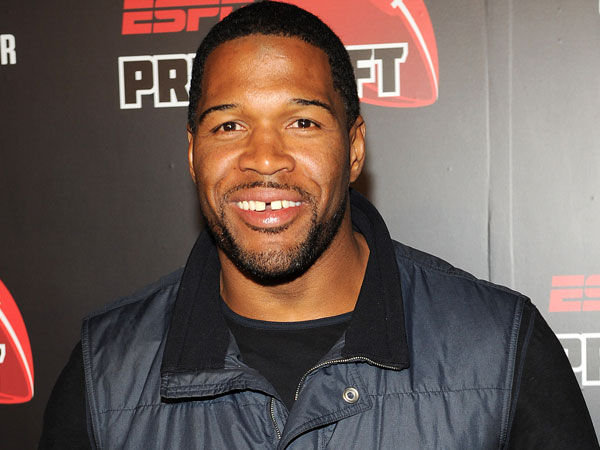 We share a certain dental trait, which I admit has caused me some self-confidence issues in the past.

With that in mind here is the conversation I had with little Ashlyn.

We were playing, probably tea party, or piggy back, or some other variant which usually ends with me turning into some sort of jungle gym equipment to be climbed on.

There was a pause and she asked,
“Are you missing a tooth?”

Laughing I said, “No, I just have a gap between my two front teeth”

She looked at me and thought for a moment, and then said the simple yet profound, “So that’s just how God made you!”

I’ll be honest, I think I was almost caught off guard with emotion, but with a very large Strahanian smile I said, “Yup, that’s how God made me!”

In the eyes of a child, our dental differences weren’t strange, I wasn’t broken or in need of orthodontic assistance, I was an example of the wonderful diversity and complexity that makes up God’s creation. What I saw as blemish, she saw as beauty.

There is an amazing story in the Gospel of Matthew where Jesus clears out the temple courts because they are being used as a shady strip mall rather than a place of worship and prayer. Then a bunch of blind and lame people come to him at the temple, and he heals them.

He makes the temple into what it was supposed to be, a place to encounter God and his blessings, but what happens next is even more astonishing. The story continues and the chief priests and teachers of the law (people probably making a profit off of these business exchanges) saw the wonderful things he did and the children shouting in the temple courts, “Hosanna to the Son of David,”  and were indignant.

When they question Jesus about what these children are saying, Jesus quotes Psalm 8 and says,
Have you never read,
‘From the lips of children and infants
you have ordained praise’?

Jesus has just done an amazing thing- he’s restoring the intention of the temple, trying to make it into the life giving place it was meant to be. The chief priests themselves miss the point, but children understand perfectly and join the party, praising God.

To wrap up, two final comments.

One, I’m not saying youth is better. I firmly believe in honouring, respecting and looking to our elders, parents, and those who have gone before us for guidance. There is too much in western culture that teaches us “out with the old, in with the new” and we need to be reminded that wisdom comes with age, and that maturity matters.

Two, we need to listen, and open our eyes, to what God is doing in the world and saying to us even ,or maybe especially, when it comes from an unexpected place. Yes, we test the things we hear, we examine them and think critically about them, making sure they align with God’s love and goodness.

But what we must not do is assume that God is finished speaking to us, that he is no longer guiding us and pulling us forward, that he won’t use any means he can to bring us into new life, because he will.

So may we be a people with open eyes, and ears, eagerly seeking God’s presence in our lives and in the world, ready to join in the wonderful work that he is doing, because God is speaking to us, connecting us, and leading us into a better way to live, and sometimes he does that through the words of kindergartners.